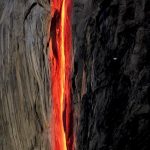 “So you went to the Louvre:

What did you see?

After the first Artist

Only the copyist.” – Renny Russel: “On The Loose.”

It is intriguing to wonder what the Ahwahnechee Indians must have thought when they observed Yosemite’s Horsetail Fall. It is quite likely that, because of when, where and how they lived, they understood the mysterious event better that the Greeks and modern scientists. Perhaps they thought “The Great Spirit” was offering them a gift of water that could morph into liquid gold, then into liquid fire and return to water.

Before the periodic chart was developed, Empedocles proposed that the known universe was made out of four “elements;” earth, water, air and fire. Aristotle added a fifth element, aether; it has been called akasha in India and quintessence in Europe. Quintessence emerged with a plethora of supporting synonyms, which include, heaven, spirit and soul. Perhaps not surprisingly, the concept of the five elements formed a basis of analysis in both Hinduism and Buddhism .

With that as background, it is not surprising that thousands of Nature lovers flock to Yosemite Valley each February, in hopes of being lucky enough to see the illuminated Horsetail Fall. Aristotle would have rejoiced and properly pointed out that the stunning spectacle was caused by the “5 elements,” earth (rock), water, air, fire and aether.

The potential of being thrilled by the beauty of the event is enhanced by the fact that it is a complex, illusive synchronicity. All five elements have to converge at a precise time and place in Yosemite Valley. The sky must be clear, atmospheric conditions must be ideal; the necessary amount of water present and the setting sun must be at the perfect angle of inclination. Typically, this can only happen during a few days each February when the illuminated water can cascade down nearly 2,000 feet to Yosemite Valley.

Early concessioners at Yosemite must have seen the February spectacle and lamented that it did not occur more regularly and thus attract more tourists. By 1872 a road had been built to Glacier Point and soon after, concessioners began building a huge bonfire each afternoon. They piled on large chunks of red fir bark, which is a natural insulator and somewhat fire resistant. By 9:00 PM each evening, the fiery embers were shoved over Glacier Point in what was called “The Fire Falls.”

This practice continued nearly 100 years, but was terminated in 1968. Although the show was impressive to many, to seasoned Nature lovers, there was an unsettling sense of ersatz about it. Simply put, it was impossible for a fire to spontaneously combust in the afternoon and then fling itself over a cliff after nightfall; not to mention the huge waste of logs and fir bark.

As camping, hiking, backpacking and ecotourism became more popular, YNP properly concluded that the Fire Fall had an unnatural, Disney Land, feel about it.

Perhaps, on a deeper level, they realized that it was impossible for man to “improve” Yosemite’s “quintessence.”

The people who flock to Horsetail Fall each February may or may not be overtly spiritual people. However, the mere fact that they are responding to one of Mother Nature’s more extraordinary displays suggests an inner sense of awe, wonder and spiritual curiosity.

I don’t recall John Muir mentioning the fiery version of Horsetail Fall. However, if he did see it, I can imagine him raising his arms to heaven, like a Baptist Preacher, and exulting, “Thine is the kingdom, and the power and the glory for ever and ever, amen!”