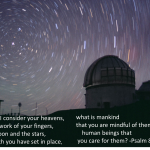 “I used to envy the father of our race, dwelling as he did in contact with the new-made fields and plants of Eden; but I so no more, because I have discovered that I also live in ‘creation’s dawn.’ The morning stars still sing together, and the world, not yet half made, becomes more beautiful every day.”   John Muir

Like so many of Muir’s power-packed-paragraphs, there is a cartload of wisdom in this one. In two simple declarative sentences, he is acknowledging, thanking and communing with God. Furthermore, he is tacitly suggesting that the words “evolution” and “creation” are one and the same.

Darwin’s, “The Origin of Species,” was published in 1859. Muir was 21, but after 50 years of researching his works, I have not found one reference to Darwin. I suspect that he would have regarded the so-called “great debate” of Creation vs. the theory of evolution a superfluous waste of time.

I find it intriguing that often, when John Muir lovers discover that he carried a pocket version of  “The New Testament and Psalms” with him on his excursions, they become vexed, even defiant. I suspect, that in an effort to conform to “political correctness,” even USPS “interpretive naturalists” religiously ignore Muir’s depth of Christian spirituality (pun intended).  Perhaps they do not know (or care) that, as a mechanical engineer, Muir regarded Yosemite as nothing less than one of God’s most “glorious” creations.

Unlike me ;o), Muir knew all of the Psalms by heart and I cannot help but think that he was the superb embodiment of Psalm 8. I know of no other naturalist who approached this level of perfection and therefore it is not surprising that many consider him the world’s greatest naturalist.

To that point, watching the ecological destruction of Planet Earth, if Muir were alive today, I am not so sure he would still think:

“The morning stars still sing together, and the world, not yet half made, becomes more beautiful every day.”