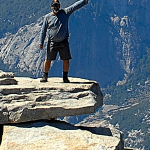 Many of the older Scots claim that they can communicate spiritually with deceased family members and friends by a process they call “kything.” If this is so, I am guessing that John Muir recently did the Scottish version of the “dance of joy” in his heavenly habitation (“God And The Angels Be True”).

Muir believed that Yosemite’s Half Dome was a high altar, appropriately situated at the east end of what he regarded as a natural cathedral, seven miles long by one mile wide. Altars are natural or man-made shrines that have been consecrated by the hearts of men for the purpose of religious or spiritual ceremonies or events. Muir expressed deep concern that many have forfeited their God-given gift of spiritual celebrations at these altars. Although regular church attendance in the US may be declining, for those who make the 5,000 ft. climb up to the top of Half Dome, it is not uncommon for them to triumphantly raise their arms.

With this being so, Mark Salvestrin recently committed a personal rite of sanctification by simply raising his hands (and a book) to the heavens. The book was inspired by John Muir and written by over 700 very curious and very courageous high school students. In the letter previously posted he wrote:

“Some of the concepts we learned and the ideas we shared took shape as threads that would be intricately woven into the fabric of my life.”

Following John Muir (and a plethora of mentors) Mark has immersed himself in Nature, evinced by the recent pilgrimage that he and his wife made to the top of Half Dome. Two weeks later, they doubled up with a hike to the top of El Capitan. The views from “El Cap” are as impressive as those from Half Dome and can be reached without experiencing “Disney Land” throngs of people crowding the trails.

My best guess is that Mark chaperoned at least 10 Biodesign trips.  He will deny it but, in a splendid irony, the book he is offering to the cosmos would not have been possible without his loving support and guidance.

Furthermore, what he did not mention was that he, and over 700 other students, added threads that were woven into the fabric of the author’s life. Soul building was part of what we were about, along with accepting Muir’s challenge to get as close to the heart of Nature as we could.

The photo of Mark holding up a summary of 24 years of wilderness adventures gave me goose bumps. None of the adventures would likely have happened without a very perceptive girl asking a simple yet profound question.  As Muir feared, I could have missed over 30 celebrations at his High Altar and spent my career dissecting fetal pigs.

It is my sincere wish that some of the lessons that Mark and I and hundreds of others experienced on our wilderness excursions, will be shared to lift the spirits and gladden the hearts of readers.