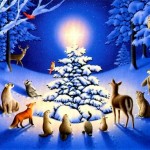 There are many historical references (other than The Holy Bible) that an extraordinary cosmic event happened in the year 02 in Bethlehem. Whether it was an unusual convergence of planets, or some other mysterious cosmic event, it became the greatest epiphany the Earth has ever known.

Based on archaeological relics, anthropologists suggest that man’s spiritual quest began about 100,000 years ago. These relics indicate that as man’s heavy dependence on instinct declined, it was replaced with a converse increase of consciousness, free will and the importance of human values. This 100,000-year journey has been enhanced by the millions of heroes and saints who have made huge sacrifices attempting to elevate humanity to a state of; “thy will be done on Earth as it is in heaven.”

Although January 6 is the day that many Christians celebrate the arrival of the “Three Kings” at Bethlehem, it also encourages us to contemplate the wonder of how our lives have been guided by our unique epiphanies. They are related to serendipities and synchronicities, but seem to be perfectly matched to unveil our emerging personalities. The overarching question is; “where do they come from?” Are they merely self-induced revelations that bubble up into consciousness from deep within or are they messages or guidance from some mysterious outer force?

I recently received a note from an ex-student:

“I think epiphanies are too often associated with the “struck-by-lightning” moment. I have found that some of the most important ones are fueled by a slower-burning fuel. That long spiritual journey of learning and observation and experience that keeps revealing new epiphanies over time.”

John Muir’s life was shaped by so many amazing epiphanies that it seems like he must have experienced one every day. Perhaps he did. Several of them nearly cost him his life and led to his quip; “Sometimes God has to nearly kill us to get us going in the right direction.”

Perhaps his greatest one, which literally turned his life “tapsal-terrie” (Scottish for topsy-turvy) eventually had a revolutionary impact on the emerging concept of “spiritual ecology.” He was re-lacing a leather drive-belt in a lumber mill when the file he was using flipped up and punctured his right eye. As the vitreous humor dripped into his cupped hand, a fellow worker heard him wail, “My right eye is gone, closed forever on all God’s beauty!” Then, as his doctor predicted, his unharmed eye went blind “in sympathy” and he was ordered to spend a month in a darkened room. Understandably, he later described his internment as: “The darkest time in my life.”

Intriguingly, two natural events added to the drama of Muir’s encounter with fate:

Saying good-bye to making lots of money by additional mechanical inventions, he began a “1,000-mile walk,” hoping to study the botany of South America. However, due to several additional epiphanies, he ended up in Yosemite Valley, where his discoveries and writing have literally changed modern humanity.

Remarkably, Muir’s message of encouraging people to “go to the mountains and seek being reborn,” bears witness to his faith that epiphanies aplenty are waiting for the spiritually curious.