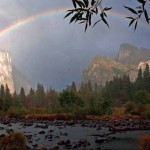 The Excesses of God

Is it not by his high superfluousness we know
Our God? For to equal a need
Is natural, animal, mineral: but to fling
Rainbows over the rain
And beauty above the moon, and secret rainbows
On the domes of deep sea-shells…
– Robinson Jeffers

In his wonderful poem, “Excesses of God,” Robinson Jeffers accuses God of being superfluous: [Lavish, superabundant, over-the-top.] I am upping the ante by suggesting that He can be a flamboyant showoff. I am not challenging God, but if a bolt of lightning strikes me, it will prove my point. How else can we explain what happened at Yosemite Valley on Wednesday, 9-30-15. Yosemite NP was celebrating the 125th anniversary of becoming a National Park. I am sure that rangers carefully planned the event, however, what they could not plan was the amazing and mysterious appearance of a double rainbow that arched over Yosemite Valley.

Scientists, secular humanists, skeptics and human Eeyores will dismiss the event as a spiritless, “random act” involving weather and light refraction. Really?  Science is supposed to be based on facts and predictable results, neither of which applied in this situation. Common sense dictates that there were zero odds that could allow for the event to occur at the perfect time. To prove this, how many non-believers (or believers) would have bet money that the event would happen? The truth is that that the double rainbow was a splendid synchronicity, with no known causation.

John Muir considered Yosemite Valley as a natural cathedral. The millions of transcending experiences that Yosemite has generated bear witness to the wisdom of his contention. These events occur when people temporarily escape human limitations and transcend to higher levels of spiritual awareness. With this being so, imagine what park rangers (and visitors) must have felt, standing amidst Yosemite’s multiple natural iconic wonders, celebrating their 125th anniversary, when a brilliant double rainbow arched above them. It reminded me of a similar event that occurred in the Biodesign Class of 1980.

In the late 1970s, several successive Biodesign classes experienced beautiful rainbows on their Yosemite trip. It led me to become a little smug. Foolishly, I predicted to the class of ’80 that they would see a rainbow. However, the first two days were uneventful and by the third day a few of the guys began to heckle me about my boastful prediction. By the morning of day 5, our last full day there, I resigned myself that I would have to “eat crow” and apologize for my excessive pridefulness. I decided to wait until our evening class session and accept my well-deserved ribbing.

Excerpt: Biodesign Out For A Walk, chap. 24, Synchronicity and God:

After lunch, this class elected to go out into the nearby meadow and play a game that was a blend of rugby and human destruction-derby. I watched for a few minutes, but when girls began launching their bodies into the scrum, I left. I had much to do, cleaning and storing all of the kitchen equipment in preparation for a morning departure. As I worked, I noticed the increasing cloud cover, but smiled confidently. We were not on the Dome or on the trail so it was of little concern. About 40 minutes later, however, I heard a bloodcurdling yell from the meadow.

I pictured a broken arm or leg or maybe worse. Hurriedly, I dried my hands and raced up the trail toward the meadow. Denise met me halfway, grabbed my arm, and dragged me along. When we reached the meadow, no one was huddling over an injured student; instead, all were standing and staring skyward in total silence. One of the most beautiful rainbows that I had ever seen arched across the sky, with Half Dome perfectly positioned below the arc. I joined the silence and was stunned and embarrassed at the same time. After a few minutes, one of the hecklers edged over and whispered, “OK, how’d you know?”

I shook my head in denial and said, “I didn’t, and I won’t make that mistake again.”

I am certain that many hearts leaped up at Yosemite’s 125– year anniversary celebration. I am also quite sure that Robinson Jeffers, William Wordsworth and John Muir would agree that the beautiful double rainbow was a miraculous, ephemeral signature of God, claiming responsibility for creating one of the most beautiful valleys on planet Earth. His timing simply could not have been more perfect!

I don’t know if the current YNP Superintendent saw the double rainbow or what he thought about it. I do know that the entire Class of ’80 stood rapt (and wrapped) in awe and silent wonder. No one spoke. Instead, after a few minutes, the students quietly dispersed into The Valley, perhaps to contemplate what they had just witnessed. People will draw their own conclusions, however, I am convinced that, especially under the circumstances, I had seen a miracle.