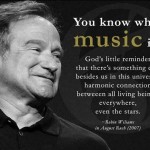 “You know what music is? God’s little reminder that there’s something else besides us in the universe; harmonic connection between all living beings, everywhere, even the stars.” – Robin Williams

When our local PBS station announced it was planning a “pledge night” featuring the1981 New York Central Park concert by Simon and Garfunkel, I dismissed it as “been there done that.” In fact, we watched the concert many years ago, made a pledge and received a “videocassette” ;o) of the concert. However, I accidentally surfed by the channel on pledge night and something very strange and wonderful happened. Christie and I were immediately transfixed. Perhaps it was because of our age, but the melodies and lyrics seemed as fresh and poignant as they did 50 years ago. We were in college, in love and their songs and perfect harmony were transcending. This was long before I became aware that music is a spiritual gift, but now I have no doubt that Paul and Art were reconnecting 500,000 fans with their spiritual roots. The results were truly extraordinary. We sat mesmerized as waves of nostalgia washed over us as we soaked up the wisdom, passion and poetry of the brilliantly gifted pair.

They conjured up the great evolutionary debate between Charles Darwin and Alfred Wallace. Because there is no known genetic cause, Darwin had no clue as to why or how music evolved in humans. Wallace concluded that musical talent, mathematic and artistic genius were spiritual gifts from God. Paul Simon would agree. 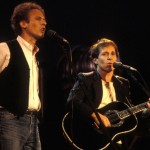 After that thought passed, a magical synchronicity occurred. They launched into a sprightly rendition of “Mrs. Robinson!” Immediately, I was struck by wonder, irony and humor. Here were two Jewish young men, singing a ballad about a 45-ish-year-old, sexually liberal woman having an adulterous affair with a young man less than half her age. The musical intensity rose as they joyfully leaped into the chorus:

And here’s to you, Mrs. Robinson
Jesus loves you more than you will know wo wo wo
God bless you please, Mrs. Robinson
Heaven holds a place for those who pray
Hey hey hey, hey hey hey

If the movie “The Graduate,” (1967) represented behavior that many regarded as provocative, Simon’s lyrics invoking Jesus’ love and the importance of praying were conversely shocking.

Simon wrote nearly all of the songs the duo sang and all of these thoughts prompted me to refer to Wikipedia to gain a better understanding of his talents.

In an in-depth interview reprinted in American Songwriter, Simon discusses the craft of songwriting with music journalist Tom Moon. In the interview, Simon explains the basic themes in his songwriting: love, family, social commentary, etc., as well as the overarching messages of religion, spirituality, and God in his lyrics. Simon goes on in the interview to explain the process of how he goes about writing songs, “The music always precedes the words. The words often come from the sound of the music and eventually evolve into coherent thoughts. Or incoherent thoughts. Rhythm plays a crucial part in the lyric-making as well. It’s like a puzzle to find the right words to express what the music is saying.”

His description was a perfect metaphor for the Biodesign Class. It was truly a puzzle and for 24 years, we tried to find the right words to express what Nature was saying.

I have been a fan of Simon and Garfunkel for over 50 years. Biodesigners used several of their songs in the beautiful slide-shows they created. These include: Scarborough Fair, Homeward Bound, Bridge Over Troubled Water, Sound Of Silence, 59th Bridge Song and El Condor Pasa. We did not use Mrs. Robinson. LOL

It seems clear to me that Paul Simon is a musical genius. He also encourages me to celebrate the obvious, that some musicians are able to create bridges, stairways, pathways, ladders, channels and mandorlas that connect heaven and Earth. Some of their songs have lasted over 50 years and there is no reason to believe that they will ever be forgotten.

Note:
It was fun to discover that Paul Simon was born one day before me in 1941.