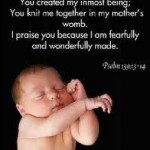 “For you formed my inward parts; you knitted me together in my mother’s womb. I praise you, for I am fearfully and wonderfully made.” Psalm 139 13-14

It is a stunning irony that an “uneducated” sheepherder wrote this Psalm circa 3,000 years ago! He may have been closer to the truth of our origin than many modern scientists can imagine. There is no scientific evidence for the origin of the universe. Likewise, there is no evidence for the origin of life. Most high school biology texts correctly state that scientists do not support the theory of “spontaneous generation,”however they proceed to pretend that a random act of spontaneous generation happened once, which led to all life on our planet. The video titled, How to Build a Worm, presents information that questions the logic and intellectual honesty that the origin of life was the result of random chance.

We are amazed when a chess master can anticipate all the possible combinations of pieces, five moves ahead. However, in order for a single, microscopic nematode to develop, the original zygote has to “anticipate,” perhaps billions of “moves” ahead. The egg begins with 100 million base pairs of DNA, however, many succeeding cells will differentiate into cells and tissues that were not present at the moment of fertilization. And they, in turn, may differentiate into other cells or tissues. This means that the adult worm will look nothing like the original zygote.

In discussing the importance of the miracle of “cell differentiation,” I used to tell students that without the mysterious process, they would have been born about the size and shape of a 7-pound volleyball. Charles Darwin discovered some of elementary aspects of evolution, however, cellular/molecular biologists have made a quantum leap in the fledgling science known as “Intelligent Design.” It may be the most important biological discovery in the 21st century.

The same can be said for Intelligent Design. The process does not reveal a “Designer,” but indicates that mechanisms of evolution are far more complex than ever imagined and a growing number of respected scientists agree cannot be the result of random activity. Ironically, Darwin himself argued that it was “impossible” to believe that something as complex and wonderful as a human could be the result of “blind chance or necessity.” During a molecular biology lecture at a prestigious University, a student asked the professor what he thought about Darwin’s Theory. The professor chuckled and responded, “There are holes in his theory big enough to drive a Mack Truck through.”

A couple weeks later, the professor received an admonishing letter from the chairman of the biology dept. informing him that Darwin’s Theory was the accepted standard for the biology dept. and any future comments to the contrary should be avoided.

In a bizarre irony, people who support the concept of Intelligent Design are frequently condemned by mainstream biologists in a reverse form of bigotry that the Catholic Church subjected Galileo to.

I am not a church-going, Bible-thumping evangelist. However, having taught high school biology for 37 years, I can tell you that the most difficult current challenges to our teens are stress and the lack of self-esteem. These are silent diseases that drive millions of them into the world of illegal drugs, alcohol abuse and premature, unhealthy sexual relationships. Science has no answers to “The Big Questions” of human existence and all references to spirituality have been removed from our schools, therefore students are left in a vacuum with the impression that they are simply a result of a soulless accident of time. Little wonder they use drugs and alcohol.

It is a tragedy of the greatest magnitude that these precious kids are not walking around each day in a state of awe and wonder, celebrating either the poetic, symbolic or spiritual possibility that they are “Fearfully and Wonderfully made.”

Please watch and share this amazing video and feel free to comment. How to Build a Warm