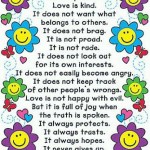 “… but just as instinct may fail an animal under some shift of environmental conditions, so man’s cultural beliefs may prove inadequate to meet a new situation, or, on an individual level, the confused mind may substitute, by some terrible alchemy, cruelty for love.”  – Loren Eiseley

Currently, there is a pandemic, vector-less disease that is threatening human populations around the world. It is enhanced by egoism, greed, fear, territorial imperative; distorted abuses of politics, sex and religion and may lead to a catastrophic decline in human populations. The cause is the worldwide failure to appreciate the importance of love in human biology and evolution.

The US is perhaps the freest, wealthiest nation in the world and yet we are plagued with massive problems of alcoholism, substance abuse, pornography, high urban crime, racial—gender—ethnic inequality, economic disparity and a 50% divorce rate. This means that 50% of the US children have to helplessly observe the disintegration of the love that once bound their parents together. It is tragically stunning to wonder what the world would be like if everyone merely attempted to embrace St. Paul’s 16-point model of love.

The Biodesign Class was envisioned by a group of spirit-sensitive students who concluded that there were more important lessons in life than memorizing all the parts of a fetal pig. They suggested that learning about love was an important part of their biology.Interestingly, shortly after the class began, someone sent me a greeting card featuring St. Paul’s world-famous treatise on love. Typically, I began each class session with “news and notes” and I decided to share the greeting card and get their response.The discussion that followed was, perhaps understandably, mostly gender-divided.  Many of the girls smiled in agreement and one of them correctly pointed out that the passage is used in more wedding ceremonies around the world than any other passage. The boys were not so sure, in fact, one of them blurted out, “That’s humanly impossible!” In the end, however, they found common ground and agreed that even if achieving perfect love were impossible, it represented a noble goal for all people to aspire to.

I decided it was a “sign” and accepted the challenge of trying it. After all, a passage that third-grade students could easily read surely would not be that hard to follow. Ergo, I vowed to follow St. Paul’s “16-step program” for one day.That was 40 years ago and it has not happened yet. ;o)

I greeted each day as a fresh chance to master the challenge.  Sometimes I made it to 3rd or 4th period, but I never made it through a full school day.  Frustratingly, one or more of the 16 points would trip me.

Before each Biodesign trip, I warned the students; “If you want to find out what kind of friend you have, take him/her camping and see.” It was not an idle warning, and I fully expected to face the same challenge, magnified by 25-30 students. Even though many trips were relatively smooth, there were usually moments when I felt that I totally failed one or more of the steps and should have handled them better.

I secretly envied John Muir, spending long periods of time, alone in the wilderness, and fantasized how easy it would be to live the “16-point challenge” with water ouzels, Douglas Squirrels and Silver Firs. He was mostly involved in a personal journey and was not challenged by 30 teenagers, some of whom took great joy in tripping teachers up.

Then I discovered Fr. John Powell’s powerful little book, “Unconditional Love,” in which he boldly suggests that we need to risk making mistakes in loving, because they often provide opportunities for growth. The key he offered was to admit the error quickly, ask for forgiveness and be willing to grow from the experience.

Therefore many years ago, I gave up my attempt to get through a “perfect day” and decided that making mistakes was an important part of learning.

I didn’t pretend to be a Bible scholar, but it was somewhat comforting to know that somewhere in the New Testament, St. Paul confessed that he also could not get through a day without making the same old mistakes.

In order to save a little pride and my sanity, I decided that it was the “journey” and not the illusive goal that was what was important.

Like individuals falling short of achieving St. Paul’s treatise on love, the Biodesign Class also failed to reach perfection. However, there was often an aura about them, both in the classroom and on field trips that subtly reflected the love they shared. They hugged each other openly and often and were usually genuinely concerned about each other. They ate together, slept together, laughed, cried and sometimes argued, but their goal was always to strive to reach a higher level of personhood.

Parents, chaperones, bus drivers, hotel staff members and airline flight attendants often commented about their unusual behavior. There were, of course, momentary lapses into raucous teen behavior, but perhaps the best summary of them came from the manager of Grand Canyon’s Phantom Ranch:

“For several years, I have been meaning to thank you for bringing your class here, but something always got in the way. I have worked here for eight years and enjoy it very much. The scenery is fantastic, and the people I work with are great. Sometimes, however, visitors are rude and obnoxious. Getting up at 4 a.m. to prepare food can be a drag. Changing sheets and scrubbing toilets gets tiresome. When I get discouraged, however, I pause and look forward to the annual visit of the magical group of students from the “Catholic High School” in Northern California; somehow, they offer meaning to my life.”