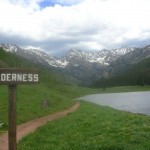 I wonder what the person was thinking when he/she ordered this sign. Is the photographer standing outside and looking into “the wilderness”? Does the trail, with a beginning and destination, not disqualify the area as true wilderness? Does the sign not reflect man’s insatiable need to tame, name, define and label everything like an alpha-wolf “marking” his territory with a squirt of urine?

“The wild is more than a named place, an area to demarcate. It is a quality that beguiles us, a tendency we both flee and seek. It is the unruly, what won’t be kept down, that crazy love, that path that no one advises us to take-it’s against the rules, it’s too far, too fast, beyond order, irreconcilable with what we are told is right.” – David Rothenberg

“Only by going alone in silence, without baggage, can one truly get into the heart of the wilderness. All other travel is mere dust and hotels and baggage and chatter.” – John Muir

Just because John Muir rarely complained about being uncomfortably hot or cold, wet or tired, stressed, thirsty, hungry, in pain or besieged by mosquitoes, it does not mean that he did not experience these discomforts. It does, however, mean that he regarded any non-lethal event as the price of admission for getting as close to the pure essence of God’s creation as he possibly could.

Here are some JM thoughts after finding a dead bear in Yosemite. (Teale)

“Toiling in the treadmills of life we hide from the lessons of Nature. We gaze morbidly through civilized fog upon our beautiful world clad with seamless beauty, and see ferocious beasts and wastes and deserts. But savage deserts and beasts and storms are expressions of God’s power inseparably companioned by love. Civilized man chokes his soul as the Chinese [bind] their feet.”

Muir’s love of the wilderness was only eclipsed by his love for his wife and two daughters. He didn’t marry until he was 40 and his wife was well aware of the importance of his love of Nature. In fact, after working for 10 years on their farm in Martinez, Ca., she described the farm as killing his spirit and that he must sell or lease it and return to the wilderness.

In a similar, but different way, in addition to my devotion to my wife and four children, my greatest joys were experienced seeing the wilderness through teenage minds.

However, in both cases, Muir and I became acutely aware that there were no words that could describe our most rapturous moments. How could anyone possibly describe sleeping on top of Half Dome under a canopy of 100 billion stars? Polaris marked the North Pole and the handle of the Big Dipper marked the hours of a cosmic clock. Frequently, either heaven came to Earth or creative, curious minds reached up to create a “mandorla,” an overlap of heaven and Earth.When asked to describe events like these, students would typically radiate warm smiles and say the experience was indescribable.

Likewise, standing on the rim or bottom of Grand Canyon, students would join John Wesley Powell:

“The wonders of the Grand Canyon can not be adequately represented in symbols of speech, nor speech itself. The resources of the graphic art are taxed beyond their powers in attempting to portray its features. Language and illustration combined must fail.”

And finally, at the end of each year, students often stood on the Mendocino headlands, looking out over the vast expanse of the Pacific Ocean and sensed wisdom that echoed from the beginning of time; off the granite peaks of Yosemite; into the depths of Grand Canyon, and thundered on the waves of Mendocino beaches—ancient echoes of time and the rhythm of the universe.