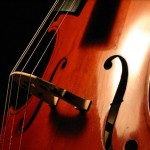 Joyful, joyful, we adore Thee, God of glory, Lord of love;
Hearts unfold like flowers before Thee, opening to the sun above.
Melt the clouds of sin and sadness; drive the dark of doubt away;
Giver of immortal gladness, fill us with the light of day!
All Thy works with joy surround Thee, earth and heaven reflect Thy rays,
Stars and angels sing around Thee, center of unbroken praise.
Field and forest, vale and mountain, flowery meadow, flashing sea,
Singing bird and flowing fountain call us to rejoice in Thee.

Several times each year, the Biodesign students entered room 103 with the triumphant music of Ludwig van Beethoven reverberating off the walls. Beethoven’s Symphony No. 9 in D minor (also known as “The Choral”) was completed in 1824 and was his last complete symphony. Among both his fans and critics, it is widely considered his greatest work and many consider it one of the greatest compositions in the world. The symphony was the first example of a major composer using voices in a symphony, thus making it a choral symphony. The words are sung during the final movement by four vocal soloists and a chorus. They were taken from the “Ode to Joy”, a poem written by Friedrich Schiller in 1785 and revised in 1803, with additions made by the composer. Today, it stands as one of the most played symphonies in the world.

Regardless of the mood the students were in, the musical score and lyrics raised their spirits to uncommon heights. Students who were more prone to listen to various kinds of Rock, Jazz, Reggae, Soul or Rap, beamed with joy as if the experience were moving their souls.

Over the years, I had ample time ponder the unfathomable depth of compassion and inspiration that drove a man to hammer out notes on a piano to ears that were almost totally deaf. In his stage play, “Amadeus,” Peter Shaffer describes the obsessive angst and frustration that Antonio Salieri experienced because he knew that his musical compositions, although popular, would not stand the test of time. Mozart, on the other hand, scribbled out flawless (and seemingly endless) compositions that Salieri was convinced would last throughout the history of mankind. Although some question Shaffer’s interpretation, he raises the question as to why and how some composers can write music that will remain ageless. This presents the delightful dilemma as to whether some artists have been favored by chance-born evolution or preferentially gifted by God.

Beethoven’s, “Ode To Joy” has warmed the hearts and stirred the souls of 100s of millions of believers.  In nine years it will be 200 years old and there is no reason to believe that it will not survive until the end of human life on Earth. He composed his early works in the shadow of Mozart, and Joseph Haydn wrote, “posterity will not see such a talent again in 100 years.” Haydn may have been incorrect. It is possible, for numerous reasons, that Beethoven etal are a lost breed and the era of great composers is gone.

I am not a musicologist, but based on current trends, especially among younger musicians, it is hard not to believe that music is regressing to the prehistoric guttural grunts, snorts and growls common to our tribal ancestors.

Historians claim that Beethoven died on 3.26.1827, however, the last remaining vestige of little boy in me, chooses to believe that his spirit is alive and well in heaven and that he rejoices every time someone sings “Ode To Joy” in the shower, in village churches or in the greatest cathedrals and symphony halls on Earth.