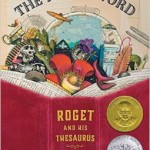 “Measured on the vast scale of the universe, the globe we inhabit appears but as an atom; and yet within the compass of this atom, what an inexhaustible variety of objects is contained; what and endless diversity of phenomena is presented; what wonderful changes are occurring in rapid and perpetual succession!” – Peter Roget

BOFAW readers know that my wife Christie has a talent of finding the right book for the right person at the right time. She recently discovered a gem of a children’s book, which can delight adults as well. “The Right Word: Roget and His Thesaurus” was written by Jen Bryant and beautifully illustrated by Melissa Sweet.

Roget was a post-renaissance British physician, thinker, natural theologian, lexicographer, seeker, inventor and scientist. He understood that there were no “scientific” answers for the origin of the universe or the origin of life and was dedicated to celebrating the blessed mystery of it all.

For 37 years I had the challenge of using words to communicate with students. Working with foreign exchange students showed me that many idioms and expressions were so deeply embedded in ethos that they could not be translated into another language. At the age of eight, Peter Roget began to understand this and started compiling words in groups of synonyms and related concepts to help him find the best possible way to communicate the message he wanted to impart.

“The Right Word: Roget and His Thesaurus” is a delight of information about Roget. He spent 50 years collecting words for his Thesaurus and was 73 when the first edition was published. 50 years ago, I began collecting “Quotable Quotes” from Reader’s Digest magazine and, in addition to a great collection of books from some of the world’s greatest naturalists, I have a mini-library of quotes and inspirational lines from Bartlett, Seldes, and many volumes of excerpted prose, poetry and literature. These include items from scientists, sages, saints, sinners and philosophers. I was nearly 70 years old when BOFAW was published.We both shared a deep love for the pure essence of being human and understood that certain words like love, spirit, soul, life force and God defy definition.

The origin and application of the word “love” is perhaps the most beguiling and enigmatic of all. There are over 12 different words for “love” in the Hebrew language, each with a specific meaning. The Greek language includes “eros” “philos” and “agape” to describe sexual, brotherly and spiritual love.  “Making love” can describe the tawdry action of a prostitute and her/his client or adding “motherly” can refer to the unspeakably tender bond of mother to child. Rumi noted: “We are born of love; love is our mother.” According to Google, there are 90 references in the Bible that claim, “God is love.” Eric Fromm (“The Art of Loving”) claimed that love is the only satisfactory explanation for human existence. In the current edition of Roget’s Thesaurus, there are 50 references to various kinds of love. The only rational conclusion from all of this is that “love” is an essential part of our “biology” and it is essentially being ignored in our public school system.

It is extraordinary that St. Augustine (1300) and Peter Roget (1850) had a better holistic understanding of the universe than “modern” scientists like Stephen Hawking and Carl Sagan. In his book, “The Great Design,” Hawking claims that believing in God has become obsolete. Evidently the Great Design did not have a “Designer.” In his book, “Cosmos,” Sagan claimed, “The Cosmos is all there is and ever will be.” Neither man could explain the cause of “The Big Bang ”or the possibility that billions of Big Bangs occurred in the past, billions may be occurring currently and billions will likely occur in the future. Loren Eiseley would properly claim that modern scientists have become intoxicated with their self-perceived brilliance and spiritually blinded by their egos.

Roget, on the other hand saw the Earth as an “atom” and would appreciate the metaphor: “The Earth is an atom in the circulatory system of God.”