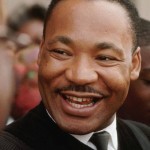 Excerpt: Biodesign Out For A Walk, chap. 21, “The Land of Pygmies and Giants.”

“As a biology teacher, I welcomed the chance to acknowledge Dr. Martin Luther King’s birthday. It was a wonderful opportunity to celebrate the courage, wisdom, and color that he added to our society. The word “color” was used purposefully in a biological, literal, figurative and respectful context. Is it not our highest calling to go beyond Dr. King’s, “I Have a Dream,” speech, and see children and adults, walking hand-in-hand, not color blind, but rejoicing in their race, color, creed, ethnic and religious diversity? It would be biologically, if not, politically correct. When I shared this with students, they agreed.”

“In creation there is not only a Yes but a No; not only height but also an abyss; not only clarity but also obscurity; not only progress and continuation but impediment and limitation…not only value but worthlessness…It is true that individual creatures and men experience these things in most unequal measure, their lots being assigned by a justice which is curious or very much concealed. Yet it is irrefutable that creation and creature are good even in the fact that all that is exists in this contrast and antithesis.” – Karl Barth

I know of no human who understood (or lived) this statement more profoundly than Dr. King. He could have retreated to the relative comfort of being a Baptist Minister in a middle-class neighborhood without confronting the potential evils of tribalism and racism. He understood that both black and white people were capable of racism,hatred and killing each other based on the color of their skin. He experienced first hand the poverty and deprivation of an unjust society that penalized children because of their skin color. He knew all of that and yet chose to follow the model of Jesus Christ by uniting not dividing, returning good for evil, tolerance for hatred, and providing comfort and solace for the sick, downtrodden and poor.

One of the results of declining spiritual awareness, individually or collectively, is the failure to identify evil. C.S. Lewis wrote about this and Plato suggested that evil exists in antithesis to goodness: “If you doubt the existence of evil, try to do something good and see what happens.”

On nearly every Biodesign trip, I was confronted with bouts with evil that were sometimes nearly overwhelming. The general feeling was intense anxiety and foreboding that what I was doing was wrong and we should go home immediately.  I had no peer or precedent support, other than John Muir, but he never led 30 high school students into the wilderness. Fortunately, they usually lasted only a few minutes and then they passed.

Although the events were scary, they were trivial compared to what Dr. King must have experienced. I cannot fathom the courage it took for him to appear in public, or lead a peaceful march, knowing that his head might be in the crosshairs of some sniper’s riflescope.

During the overwhelming pressures that would have caused lesser men to buckle, retreat or retaliate, he proclaimed, “Our lives begin to end the day we become silent about things that matter.” He chose the hard road of unconditional love and forgiveness. In doing so, he joined Abraham Lincoln, John and Robert Kennedy and all the saints and sinners who were willing to “march into Hell for a heavenly cause.” Dr. King’s life and work were the result of his deeply rooted Christian faith, which was challenged, ridiculed and besmirched.George Bernard Shaw supposedly quipped: “Christianity might be a good idea if anyone ever tried it.” George Bernard Shaw did not know Dr. Martin Luther King.