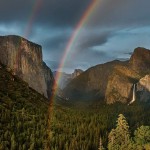 You gifted me with a perfect, champagne-bubble-bursting-moment that was more valuable than a Ralph Lauren tie. I don’t know what is more extraordinary; the fact that 35 years have flown since Biodesign ’80 graduated or that many of my memories of your class remain as clear as if they happened yesterday.

For example: Jeff Rydman and I were hanging around the campfire ring at Mendocino. Out of the blue, he asked, “OK, so who exactly do you think Jesus Christ is?” I encouraged all classes to “question all things (and people)” but this question was truly shocking. I rarely offered my personal opinion on any subject, but deferred to “experts” in their respective field. In this case, I referred Jeff to C.S. Lewis by citing:

“We are faced, then, with a frightening alternative. This man we are talking about either was (and is) just what He said or else a lunatic, or something worse. I have to accept the view that He was and is God.”

Conversations like this were rare, but always frightening. I wanted to provide the best answer I could for Jeff, but wondered if by doing so, I was breaching the wall of separation of church and state.

Jeff handled it beautifully. He looked at me intently, smiled and asked, “No door #3?” We both broke into uproarious laughter. It was paradoxically one of the most profound and hilarious moments of my life. His question still remains and it is the sacred privilege of each human to find his/her ultimately personal spiritual path.

The Class of ’80 would be part of a long line of classes that asked me the same question just before they graduated: “Were we the best class yet?” Typically, I laughed and avoided answering, knowing that to do so would be like designating one of our four kids as the most special. Perhaps, what was more important than “favored-class-status” was how each class handled or created extraordinary events.

If I couldn’t choose a favorite class, it was also impossible to pick a favorite story that I included in the book. However, Chip’s Story was so extraordinary that I doubt that any Biodesigner would object or have his/her feelings hurt.

“On a warm spring day after school hours, I was in the classroom grading exams. The door was open to allow for better air circulation.I heard the familiar whine of an electric-powered wheelchair approaching from the hallway. In a flash, a pang of panic surged through me. I instantly knew who it was and what he wanted. The chair motored into the room with its broadly smiling occupant.

Chip spoke very economically, avoiding unnecessary words, and so he went straight to the point.

“Mr. Young,” he said, “I would like to enroll in next year’s Biodesign class.… I promise I won’t be a burden to you,and I am certainly not looking for sympathy. It’s just that my doctor’s prognosis is that I will probably not live much beyond 22 years. Watching the slide shows and listening to your stories made my heart jump for joy. I knew I was taking a big risk by coming here to ask for permission. However, I figured the worst that you could do was say no, and I could handle that.”

What happened that year probably could not have happened in any other “advanced biology” class on planet Earth. When our daughter Maureen was 13, she got to go along on the 1980 trip to Mendocino. She recently commented on Dina Mande’s Fb post:

“You all looked so mature to my younger eyes. I loved the friendship and camaraderie you all shared, not to mention the humor. That was the year the Peanut Butter Song came into my life.”

She was spot on. The love, compassion and camaraderie that they shared was indescribable. They adopted Chip as a brother which involved caring for him in Yosemite, pushing his wheelchair up and down San Francisco’s Nob Hill and pushing him along a 7-mile, disability not approved trail in Mendocino.

In his final paper in June Chip wrote:

“I signed up for the class because I thought it would be fun; I had no idea that it would help prepare me to face the end of my life. Such great feelings of happiness, goodness, and love have filled my heart and warmed my soul. John Denver’s song, Love Is Everywhere, was right on. Love was everywhere; in our classroom circles; at Yosemite; at Mendocino. It was there in the cheers, tears,laughter, hugs, songs, and metaphors. I saw it, heard it, touched it,and felt it. You guys have not only helped me prepare for dying, you have encouraged me to make every living minute count.”

Chip’s doctors were correct. He died in his early twenties, but proved to be one of the greatest teachers I have ever known.

Thanks Dina for conjuring up precious memories of a bygone era.