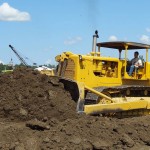 When new owners purchased the property adjoining ours, it included 50 acres of abandoned olive trees. When they decided to expand their grape vineyard, the old olive orchard had to be cleared. In a previous life, I worked as a “Cat-skinner,” and so I was not surprised by the low-toned thrum of the approaching Caterpillar D-9 bulldozer. What was about to happen, however, was shocking and created an intense learning moment.

As the tractor driver approached an olive tree near our property line, he lowered the bulldozer blade enough to scrape the surface of earth. He had done this hundreds of times previously and so there was no reason to expect that this time would be different. Both he and I were in for a huge surprise.

Suddenly, he threw the clutch lever into neutral and leaped from the high tractor. He landed on the run with arms flailing, a tortured look on his face, and was cussing a blue streak. He headed straight for a garden hose next to our barn, turned it full on and sprayed his head and body. It all occurred so quickly, I was having trouble processing what was happening. Then a sting on my right arm included me in the little drama and answered my questions.

Meanwhile, the tractor driver ripped the shirt tails out of his jeans, popping all the buttons off. Evidently some of the bees got under the shirt and were brutally attacking him. Still flailing wildly, he used the wet shirt to swat at his attackers.

Everything happened in slow-motion and so it seemed like a long siege; the actual attack probably only lasted for a couple of minutes and then the bees retreated.

Hearing the commotion, Christie ran from the house and offered to stir up a batch of baking soda and meat tenderizer. This was what our family doctor recommended when one of our kids got stung. The driver respectfully declined. I was concerned about anaphylactic shock and offered to take him to a doctor. He declined my offer as well.

Instead, he slithered into his torn, wet shirt, made a wide circle to the back of the tractor, climbed on and slowly backed away.

In honor of Robert Burns, I contemplated the event and came up with more questions than answers.

Why did the bees attack the driver and not the shiny bulldozer blade that was destroying their underground nest?

Why did they not attack the whirling, engine fan-blade which would seem to be the center of action?

Instead, the bees went straight for the monstrous animal that was responsible for destroying their habitation. Bees evolved millions of years before humans, however, they have been mysteriously equipped with the ability to discern between man and bulldozer as their enemy.

Lowell H. Young, Author: Biodesign Out For a Walk