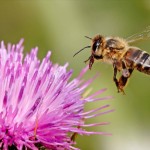 To make a prairie it takes a clover and one bee,
One clover, and a bee.
And revery.
The revery alone will do,
If bees are few.
– Emily Dickinson

Charles Darwin called the emergence of the angiosperms (flowering plants) an abominable mystery. He also had no clue how or why the human brain evolved. It took naturalist Loren Eiseley (The Immense Journey) to complete the triad by pointing out that the evolution of both the flowering plants and humans would not likely have happened without bees and other insect pollinators. Ergo: Flowering plants, humans and bees have become a macro-symtriotic relationship. Without flowering plants and bees, human life, as we know it, would definitely not be the same.

We have only begun to understand the mystery and wonder of bees. We don’t k now how they fly (200 wing-beats per sec) create complex hexagonal combs, convert nectar into honey, pollen into bee bread and use propolis as a building material. We don’t know what they know, but we do know that they communicate and are socially interactive. Generally, their behavior is considered entirely “instinctive” however, more and more scientists are admitting that, “Instinct is just another word for something we don’t understand.” The Tao of Pooh (Benjamin Hoff)

Every cell in their body needs over 2,000 enzymes, co-enzymes, vitamins and minerals to function. The billions of cells are grouped into tissues, organs and systems that carry out highly complex functions. Although we can partially understand how DNA can create body structures, we have no idea how bees can be pre-programmed to handle the millions of sensory and motor instructions necessary for their survival.

As with all life, the quintessential question is; how did bees, flowering plants and humans evolve? Believers in “scientism” proclaim that all of evolution has been the result of “chance” and “random” activity. Charles Darwin, Alfred Wallace and Loren Eiseley, disagree and suggest that the process must be the product of “intelligent design.” None of them attempted to define a Creator, but all agreed that all of nature is evidence of a mysterious super-human being.

In the introduction to Loren Eiseley’s, The Star Thrower, W.H. Auden wrote:

I do not personally believe there is such a thing as a “random” event. “Unpredictable” is a factual description; “random” contains, without having the honesty to admit it, a philosophical bias typical of persons who have forgotten how to pray.