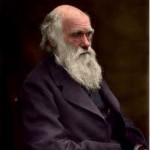 Am I the only one on the planet who has read, The Autobiography of Charles Darwin? The authors of the link: http://www.evolutionnews.org/2014/07/we_hold_some_tr087471.html
obviously must not have or they would have noted that Darwin actually entertained thoughts very similar to those of Isaac Newton and Thomas Jefferson.

“This follows from the extreme difficulty or rather impossibility of conceiving this immense and wonderful universe, including man with his capacity of looking far backwards and far into futurity, as the result of blind chance or necessity. When thus reflecting I feel compelled to look to a First Cause having an intelligent mind in some degree analogous to that of man; and I deserve to be called a Theist.”

The words could hardly be closer to those of Newton and Jefferson, however, very few high school and university biology students will ever be directed to them. So called “progressive” scientists, teachers and professors have hijacked Darwin’s work and created a soulless, Godless “Darwinism” that liberates man from a “higher moral authority.”
Elsewhere, Darwin admitted that his theory does not address the origin of life, the emergence of human beings and the whole realm of human spirituality.

Amazingly, in most US universities, these mysteries have been ignored, lied about, obfuscated or explained by a bolt of lightning.