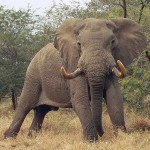 Excerpt: Biodesign Out For A Walk, Chap. 9, “Gratefulness.”

“Students had shown and taught me things that were simply impossible for me to discover on my own.”

For many years I had a cartoon on the bulletin board in the front of the biology room. A herd of elephants were milling around in a dusty commotion with their trunks raised. The caption read: High School education is a lot like elephants mating. There is a lot of  pushing, shoving and loud trumpeting and 18 months later there are results. The students got a good chuckle out of it.

“On March 7, 2012 Lawrence Anthony died. He is remembered and missed by his wife, 2 sons, 2 grandsons, and numerous elephants. Two days after his passing, the wild elephants showed up at his home led by two large matriarchs. Separate wild herds arrived in droves to say goodbye to their beloved ‘man-friend’. A total of 31 elephants had patiently walked over 12 miles to get to his South African House.”

I was deeply moved by the shared post about the death of Lawrence Anthony, author of, “The Elephant Whisperer.”

In every good book there is a compelling thesis statement that unites the soul of the author to his/her reader. I did not have to search far for Lawrence’s. It appeared as the third paragraph in his prologue:

“Make no mistake, the title of this book is not about me for I make no claim to any special abilities. It is about the elephants—it was they who whispered to me and taught me how to listen.”                       Lawrence Anthony

I felt an immediate kinship with Anthony’s spirit and with very little effort paraphrased his disclaimer:

Make no mistake, Biodesign Out For A Walk is not about me for I make no claim to any special abilities. It is about students—it was they who took me on a journey that Joseph Campbell called, “The Soul’s High Adventure.”

I had no preconceived idea about what was in the book, and did not expect to discover a literary soul-mate. As it turned out we were both seekers, however, more importantly we both discovered that our students often knew things that were far beyond our knowledge.

There were times when the elephants could read his mind and emotions; I had students who could complete my thoughts and read the joy, sorrow, anguish and frustration when I was struggling.

There were several times when elephants charged him and veered off at the last second; there were equally scary times when Biodesign students intellectually challenged me, sometimes resulting in anger and recrimination.

The bottom line for both of us was that elephants and students represented a level of “intelligent design” far beyond what man has ever guessed. Students typically are made up a 100 trillion cells. Standing 10 feet tall at the shoulder, an African bull elephant may contain 8 thousand trillion cells and weigh as much as a Mack Semi-truck.  If we can not completely comprehend the workings of a single cell, how can we arrogantly assume that we understand man or elephant? Each group also has mysterious powers that man will only fully understand when he understands the mind of God.

Lowell Harrison Young, Author; Biodesign out For A Walk