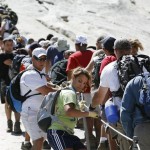 Controversial issues can not exist without at least two conflicting points of view. Although John Muir’s primary vision for Yosemite Valley was a place for spiritual renewal, he also described it as a place to play. In a discussion about whether to allow automobiles into Yosemite Valley, he reluctantly agreed that it was probably a necessary evil. As brilliant and far-seeing as he was, he could not have imagined 20,000 people being admitted to The Valley on a given day.

Nevertheless, his vision of national parks was worthy and spread globally. In some cases it has evolved into privately owned preserves that welcome eco-tourists. The combined efforts may be the only hope that many African animals have for escaping the perils of hunting, poaching and habitat displacement.

Carefully planned eco-tourism is not only good for animals and their environment, but it provides sustainable employment. Few objections have been raised against people like Lawrence Anthony (The Elephant Whisperer) who have established eco-tourist game reserves. His Thula Thula reserve, in Zululand, is a widely respected model. Before he died he and his wife welcomed up to 30 guests to stay for as long as a week and take daily safari tours around the 5,000 acre reserve. The area is about 7 times larger than Yosemite Valley and obviously, if he had allowed 20,000 visitors a day, his reserve would have quickly been destroyed.

Just like over-fishing and over-hunting will deplete game reserves, uncontrolled eco-tourism can be exploitive and harmful. Surely, even cold, calculating bean-counters must see that, especially in summer months, Yosemite Valley has become a socio-cultural, environmental disaster not unlike a war zone.

The attached photo of Half Dome was taken in 2010. Again, John Muir could not have imagined over 2,000 hikers, from ages 8-88, making the challenging, 16-mile round-trip trek to the top of The Dome and back to The Valley floor. After years of abuse, YNPS finally imposed a limit of 400 permits per day. The situation has been greatly improved.

During the 1970s, when the Biodesign Classes arrived each fall, there was only one campground open and it was half empty. There were only sparsely scattered hikers on the Half Dome Trail and we seldom saw anyone on the cables. The overnight accommodations were not sold out and The Valley floor exhibited a relaxed, dreamlike quality. It was John Muir’s favorite time of year to be there.

Those days are forever gone, but surely Yosemite lovers and intelligent YNPS leaders understand that the first step in solving the eco-crisis is restricting the daily number of Park visitors.