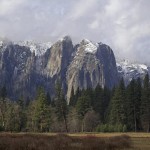 Wayne entered my life with his Choctaw heritage and inspired me to learn more about Native American history, wisdom, ecological knowledge and spirituality. He is in a minority of “Indians” who survived the transition into “paleface ways” where millions of his fellow Native Americans died.

Synchronicities are not always funny of playful. On the very day that I posted the piece on the 50-year anniversary of Native Americans attempting to lawfully reclaim Alcatraz Island, Yosemite Nat. Park posted the photo and description. What kind of twisted logic would compel a YNP spokesperson to revise history and suggest that the event was an “unfortunate” “sacrifice.” The unvarnished truth is that in 1851 the US military brutally dragged a tribe of peaceful men, women and children from their homes in Yosemite Valley and forced them to live in quasi-captivity.

This is the same military that gathered blankets from soldiers dying from smallpox and traded them to starving and freezing “Indians” for land. The military clearly knew that the blanket trade would speed the small pox epidemic among the tribes and save money for bullets necessary for their extermination. This horrible “history” is recorded in a song by Buffy Sainte Marie titled, “My Country Tis Of Thy People You’re Dying.”

Each year I played the song for all of my biology classes. The results were typically stunning; most sat in somber silence. Occasionally a “red-neck” type male would snort disapproval and occasionally a student would say, “I refuse to feel guilty for what others have done.”

The song may be the most tragic American folk song ever written, but even more tragic is the fact that most wine-sipping, BMW-driving Americans don’t know or care about it.

Word usually got back to the administration and I might get a letter of reprimand that was “placed in your file.” I don’t know what high school US History books look like today, but up to the early ‘90s the book SHHS was using had a half page titled, “Cowboys and Indians.”

What if an army of Native Americans landed on Acatraz Island and brutally dragged USPS men, women and children away and forced them to live in impoverished exile and later wrote that the NPS employee’s “sacrifice” was necessary for the ultimate preservation of  Alcatraz Island?

There are few American economists who believe that the US will be able to sustain the massive debt that it has incurred. There will be necessary government cutbacks and one area sure to be impacted will be the NPS. What a novel idea it would be to get ahead of the crash and return Alcatraz to its rightful owners.