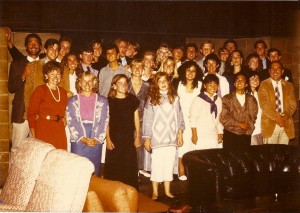 An Evening at the Ahwahnee

For the first 10 years of Biodesign, on the last night of the Yosemite trip, we walked the short distance from the group camp area over to the Ahwahnee Hotel. I thought it was a good idea to provide the students with as complete experience as possible which included a visit to the Hotel. I have to confess that I assumed a bit of “Murian” attitude as we clomped through the magnificent building in our trail-worn clothes and hiking boots. Typically, the staff was not impressed with our presence, but we were never treated unkindly. The girls especially were usually impressed while peeking into the dining room to see 200 guests luxuriating with fine silver, table linen and fine food.

On the ’83 tour through the Ahwahnee, one of the girls suggested that it would have been fun if we had our last dinner there. Most of her classmates (and me) scoffed at her idea. However, after we returned home, I mentioned the idea to Christie, and she agreed with the student. I warmed to the idea and mentioned it during the planning stage the following fall. The students had discovered the concept of “carnival,” and I suggested that it could be a more formal ending for our trip. It meant that we would have to include “nice” clothes, and the guys needed to bring slacks and a sport jacket, but they generally agreed.

The trip progressed with its typical ups and downs, stress, pain and hopefully growth, and most of the students welcomed the chance to take a hot shower and put on clean clothes. The dining room was magical. A piano player played an eclectic blend of pop, show-tunes and classical music which added to the ambience. The waiters filled water glasses, after two or three sips, striking a sharp contrast to guarding every drop of water sipped on dusty rails.

After dinner, we adjourned to the Great Room to relax and enjoy the moment. There was an 11ft. concert-grand piano that was used for evening entertainment, piano concerts and special musical events. Many of the Biodesign students were also enrolled in the SHHS jazz choir made up of highly talented singers and musicians. I wasn’t clear yet on the concept of “synchronicity,” but we were about to experience an event that defied earthly understanding. One of the students approached me and mentioned that Christine Heinemann, the jazz-choir pianist, knew many pieces by heart, and he thought it would be nice if she could play the piano. I thought it was a great idea and immediately went to the concierge and naively asked if we could get someone to unlock the piano cover. She looked a bit disgusted and said, “I am afraid that will not be possible. All musicians have to audition with the “concert master” and their musical selections must be approved in advance.” When I asked if the concert master was in the building she seemed more irked, but directed me to his office. Amazingly, he was there, but was incredulous about the apparent boorishness of my request. I returned to the class and delivered the bad news. Sometimes students can be unrelenting with their demands and this was no exception. One of them reminded me that the choir had been on tour, won state honors, and therefore, qualified to perform. Reluctantly, I agreed to plead their case again. The concert master seemed more irritated than previously but, suddenly and mysteriously, he acquiesced. “This is highly unusual,” he said, “and I may be reprimanded but I will allow the student to play one selection.”

As we returned to the room, the students eagerly gathered around the piano. The concert-master unlocked the cover, raised the lid and politely retreated to the background.

As Christine approached the piano her face blushed with a combination of nervousness and embarrassment. We all sat quietly with joyful anticipation. She sat down, adjusted the bench, took a deep breath and placed her hands in the ready position. The expected momentary pause escalated into a collective anxiety until she finally said, “I can’t play, I’ve drawn a total blank and don’t know where to start.” I was afraid to look behind me at the concert master, but instead focused on her. I calmly (I think) whispered, “It’s OK if you don’t play, but why not take a deep cleansing breath and try it once more from the top, if nothing happens, it’s no big deal.”

She took a deep breath, slowly exhaled, and the notes began to resonate out of the piano’s raised lid. She seemed as if she were in a state of detached consciousness as her fingers flew over the keys. As the music soared, so did the spirits of everyone in the Great Hall. The tears that trickled down her cheeks triggered tears from nearly everyone listening. She finished with a dazzling flourish and the final chord echoed throughout the hall. She slumped, exhausted on the bench, while we all sat in stunned silence.

She gathered herself and said, “You all know that my dad died recently. What you do not know was that he requested that I memorize this piece before he died. This is the first time I have played it since then”

The concert master approached slowly and graciously offered Christine his hand in sympathy and congratulations. He looked at me with watery eyes and said, “extraordinary, simply extraordinary.” As he discretely recovered the piano, one of the guys whispered in my ear that the choir knew two a cappella numbers, would it be OK if they sang them. I was on a roll and said, “go for it.” Only about half of the choir was present, but they did an amazing job on a jazz number and (I think) The National Anthem. When they finished, the entire class, as well as the 30-40 hotel guests, applauded enthusiastically. As we left, an elderly lady with a huge smile and a southern drawl, grabbed my jacket sleeve and asked, “Who are these children and where are they from? I declare that sweet thing that played the piana (sic)is an angel from heaven.” I winked and smiled and said that it wasn’t within me to disagree with her.