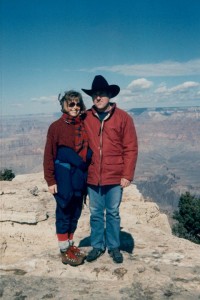 Throughout the process of writing BOFAW (and Facebook entries) I tried to shine my magical flashlight on the people (especially students) and events that created what became known as Biodesign.  It was not a poorly veiled form of self-deprecation, but an honest attempt to show that the millions of variables and puzzle pieces that had to miraculously fall into place were utterly beyond my comprehension, let alone ability to organize or direct.  The Class, and thus the book, resulted from Lettie’s simple, yet profound, question, “Is this really important?”  Over 24 years 750 more students would ask their questions that molded and shaped the Class.  If “no two people have ever met and departed unchanged,” then every student (even those who dropped the class) left his/her mark.  They were joined by over 400 chaperones, and hundreds of scientists, sages, sinners, and poets who collaborated in the creative/evolutionary process.  Just as, “there is no such thing as biological equality,” no two classes were the same.

Therefore, after much reflection and analysis, I have concluded that a mysterious supernatural being, power or process created and guided the Biodesign experience, expressly for my education.  It is probably not likely but, I hope that every ex-Biodesigner feels the same way.  After all, was the Earth not created expressly for the purpose of our education?

As this Fb page (and “blog”) began to wind down, I began searching for the perfect metaphor that would communicate the profound sense of gratefulness I felt for the privilege of spiritual sharing with all of you.  After much soul searching, the traditional Japanese Tea Ceremony came to mind.  The purpose of chado, the ritual of tea, is contemplation (to make a temple with).  The four basic principles of chado are harmony, respect, purity and tranquility.  The ceremony typically involves one, two or three cups of tea.

The first cup of “face book tea” was offered by a group of fans, friends and “likers,” and included the implicit invitation into the private (if not sacred) regions of their being.

As we sipped our tea we sauntered with Henry Thoreau seeking Holy Land and tried to live deliberately.  We hiked up Half Dome with John Muir, and into the depths of Grand Canyon with John Wesley Powell and Loren Eiseley.  We were lulled to sleep in Mendocino by the gentle rhythm of the Pacific Ocean.

We heard Brother David encourage us to actively practice the art of gratefulness, and Kabir shouted at us to: “Wake up! Wake up! You have been asleep for millions of years.  We squirmed a little when Thoreau pondered, “Oh, to get to the end of my life and realize that I have not fully lived!”  All the way, Phroncie, Jane, Jeane, Sabrina, Barbie and others, cheered me on from the sidelines.  Sharka and Mark joined us from somewhere in cyberspace and became spirit-brother and spirit-sister.  Their spectacular photos, married to inspirational thoughts (even slide-shows) took us all back to the time of wonderful slide-shows that students used to prepare.  Their presence (and presents) had a synchronistic feel with no logical reason for occurring.  How could we not love them?

I worried a little about the lack of comments, but our fb numbers indicated a lot of “passive viewers.”  Then I remembered Eckhart Tolle (The Power of Now) where he described many people as “Silent watchers.”  We hope the silent watchers have gained something worthwhile.

Even so, in spite of Sharka and Mark’s wonderful contributions, I was nearly out of photos and ideas and was prepared to gracefully leave the Tea Ceremony after one cup of tea.  Little could I have known that Lori Evensen, another member of the class of ’79, would arrive with the “second cup of tea.”  She is traveling around the US on a “vision-quest.”  I didn’t really know what a “blog” was before she invited me to follow her travels by reading: http://meanderest.com/ I was suddenly inspired to take a shot at blogging.

The blogs were intended to be reflections, illuminations and introspective glimpses into the soul of Biodesign. Whether or not the blogs spoke for themselves, they shifted the conversation to a monologue.  The single, most important secret of any success in Biodesign was the circle, and not lectures or monologues.  If, during the Tea Ceremony, the conversation lags or the guest stays too long, a third cup of tea is offered.  This is a face-saving device that leaves no hurt feelings.  BOFAW Fb viewers were too kind to offer the “third cup of tea,” still; my spirit guide was telling me it was time to take another trail.

The final Biodesign trip each year was to the Mendocino coast of California.  On the final evening we celebrated our own version of a Japanese Tea Ceremony.  We thought it would be appropriate to share part of this ceremony.

“The class was sitting in a circle in the wonderfully rustic building that smelled of thousand-year-old incense cedar. The room was dark except for 30 brightly shining votive candles, each adding its unique color to the twinkling rainbow. This was their moment. They had traveled thousands of miles together; they had walked over 100 miles together. They sang, slept, and broke bread together. They had seen some of Earth’s most beautiful scenery, matched with some of man’s greatest thoughts. They had been encouraged to write their own bible. The time had arrived for them to gather the tools they had selected, pick up their candles, and head out into the darkness, alone.

Sean Gagnier, a local folk singer, stood by, poised, ready to offer his musical benediction. The six strings on his guitar were perfectly tuned and came softly to life. His eyes sparkled like Sasha’s, the Mountain Man’s, and the Mule Skinner’s, only they reflected the brilliance of 30 twinkling lights.

He began with a chorus that they all knew by heart. A chorus that echoed from the beginning of time; off the granite peaks of Yosemite; into the depths of Grand Canyon, and thundered on the waves of Mendocino beaches—ancient echoes of time and the rhythm of the universe; a chorus that united over 700 students, 400 chaperones; hundreds of scientists, saints, naturalists and poets into one glorious circle:

May the circle be unbroken.

Christie joins me in expressing our profound gratefulness for the opportunity you have given us to share our spirits with you.  We have been greatly privileged to experience something totally beyond our ability to conceive. Love from both of us.