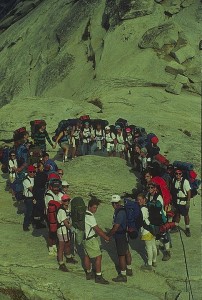 Throughout the thousands of pages of Loren Eiseley’s 13 books, his greatest single line is, “It’s a great day to be alive!”  He was camping on a scientific field trip, got up early on a crisp morning and was overwhelmed by the beauty of nature and the joy of being alive.  John Muir described a similar elated state when he was in the Yosemite high country, sustained by a pillow case of bread balls, pocket full of tea bags and a single wool blanket.  Walt Whitman wrote:

To me, every hour of the day and night

is an unspeakably perfect miracle.”

Henry Thoreau went to the woods to live simply.

Brother David Steindl-Rast describes his life as a monk as leading him to a nearly continuous state of gratefulness.

I admire all of these men but, it recently dawned on me that what they all have in common is that they spent great periods of time alone.  Leading 30 “rowdy” high school students out into Mother Nature, in search of truth, beauty, and goodness was hardly a solitary walk in the woods.  There were times that were painful, dreadful, horrifying and nearly impossible to cope with, however, the rewards were so great that it seemed like I had little choice.  The closest metaphor I can invoke is that each class was similar to having a baby.  If that is so, then it should not be surprising that some of the students became as close to me as my own children.

As this Fb page and blog wind down I find myself identifying with Ingrid.  Looking back over the 24 years, I can’t believe we did it.  It all started with a simple, yet profound, question from Lettie, and evolved into something otherworldly.  It was politically, scientifically, religiously, economically and educationally incorrect, yet the results were very, very correct.

Brother David regards every experience of gratefulness that is not shared is an opportunity lost.  Remembering this, I decided to send a complimentary copy of BOFAW to the four universities that provided the biological A-B-Cs that were necessary in order for me to become a teacher; San Francisco State U., Sonoma State U., Washington State U., and U.C. Berkeley.  I received a kind thankful note from WSU, and an e-mail note from Joe @ San Francisco.  He was interested in the book and wanted to talk with me about it.  When I saw where the note was from I burst out laughing.  When I attended “State” it was a liberal bastion and students whispering the words God or spirituality, did so at their own risk.  The professors were mostly “secular progressives” and in many cases overtly regarded any spiritual references as antiquated, if not regressive thinking.  I was OK with that, after all, I was in the “science” department and science was going to solve ALL mysteries, including debunking the “myth” of God.

I suspected that “S.F.State” is far more “liberal” now and could not imagine what interest they would have in the book.  Even so, Joe and I agreed to a phone conversation.  He had scanned the book and was pressing for a “sound bite” definition.  I laughed, knowing that when students were asked the same question, they would stammer and struggle before saying, “It can not be defined.”  Feeling the same frustration, I blurted out, “I guess you could call it “Spiritual Ecology!”  I had never heard or used the term before so I decided to Google it.  What I found was both surprising and cathartic.  Several colleges and universities, in the US and abroad, offer classes, majors, Masters Degrees, and Northwestern University offers a PhD program in “spiritual ecology.”  Suddenly I didn’t feel so isolated and that Muir, Emerson, Thoreau, and all of our protagonists, were visionaries, 100 years ahead of their time.  I also discovered Dr. Leslie Sponsel (Anthropology Professor emeritus: Univ. of Hawaii) who released “Spiritual Ecology: The quiet revolution,” one year after the release of BOFAW.

Suddenly Lettie’s question came full circle: “Is this really important?”  According to Sponsel, we are rapidly approaching the point in human history, whereby, if a world-wide renaissance of spiritual ecology is not embraced, there will be a major loss of humanity.

It is hauntingly ironic that many readers of BOFAW have contacted me and said that the book “gives them hope.”  I feel that the book is an honest narrative of kids at their finest, and that gives me hope too.  Sadly, on the other hand, adults do not offer me the same solace.

Meanwhile, Muir stated that books are merely piles of stone set out to show future travelers where other minds have been.  That being so, we are proud to offer our “pile of stone” to the universe as record of 750 kids who were courageous enough to go on a walk and discover realities that very few humans know exist.

I have no delusions of grandeur and fully realize that BOFAW has only provided a scintilla, at best, of many mysteries, miracles and revelations.  If the students only did it for me, then I am the most privileged teacher on the planet.

In the later years of the Biodesign Class, I imagined a group of Juniors gathering each spring out on the Quad and asking, “Has he got “it” figured out yet?”  “No,” someone would reply, “Well then,” someone said, “I guess we better sign up for one more class and hope he gets it.  He’s getting pretty old and Half Dome isn’t getting any smaller.”

Kahlil Gibran suggests that the depth of our sorrow is a measure of the joy we previously knew.  I have found this to be true and still experience deep pangs of sorrow reminding me of the intense joy we once we shared.