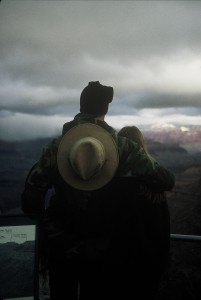 When the slide-show team completed their program they announced that they wanted to show it to the class before the parent’s night.  They felt that there were potentially intimate moments that they wanted their classmates to see before they shared with a larger audience.  They asked the superintendent’s daughter if she wanted to include her dad and she did.  The program was shown and generated howls of laughter and tears of joy and sorrow.  When it ended there was a feeling of profound reverence—even love—in the room.  When the lights were turned on many eyes were glistening.  The superintendent stood up and quietly left the room.  I wondered what he was thinking.

A couple of days later he sent the class a beautiful, hand-written letter, thanking them for including him as a fellow learner and not rejecting him as an authority figure.  He ended with, “and by the way, the slide-show was quite emotional, did you plan that?”  The slide-show team seemed to be perplexed by his question.

We were still presenting papers and Raphael, one of two Mexican students, indicated that he was ready to present his.  The class was immediately impressed with his keen insight and ability to blend reflections through the lenses of two cultures.  He created a beautiful bilingual, bicultural tapestry.  For example, he wrote, that his parents could not understand why we were going to the mountains to sleep outside.  There were many homeless people in Mexico who would love to sleep inside.  Why would people want to go outside to sleep in the cold?  He described feeling loved by every class member which was often not the case when he interacted with “Gringos.”  He described seeing, feeling and understanding things on the top of Half Dome that he could never have dreamed of before.  Sentence after sentence created a virtual kaleidoscope of images, emotions and visual clarity.  His paper was profoundly moving and left few dry eyes.  After class, I asked Raphael if I could send a copy of his paper to our superintendent.  He was honored and quickly agreed.

Several days later a letter addressed to Raphael arrived at my mail box.  I handed it to him during the “news and notes” segment at the beginning of class.  The class properly guessed who it was from and urged him to share.  He beamed with pride, opened the letter and began to read.  The letter mentioned some of the same feelings that the class had experienced, however, they were more intensely poignant, due to being spoken with a beautiful Spanish accent.  He must have felt the same poignancy because he was quickly overcome by emotions.  I was sitting next to him in the circle and quietly asked him if he wanted me to finish the letter.  He nodded yes with a bright, but tear-streaked smile.  I continued where he left off and soon found that the lump in my throat was difficult to control.  I momentarily wondered if I would have to pass the letter to the person on my other side.  When I was finished the class erupted into wild applause.  Raphael’s face was resplendent.

After class I realized I had received two wonderful gifts, Raphael’s inspiration and a response to our superintendent’s question.  I sent him a “thank you” note for both of the letters and asked, “by the way, when Raphael read your letter to the class, he cried; did you plan that?”