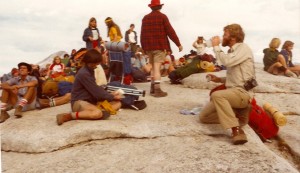 Melody Petersen (Floyd) was one of the earlier ex-Biodesigners to locate this page.  She was in the Class of ’79 and intrigued that I had singled out her class as extraordinary.  I tried to approach all classes without prejudice or expectations and, not wanting to hurt other student’s feelings, was hesitant to highlight the class of ’79.  In the end, however, the fact remained that they were directly responsible for, not only drastically altering my life and career, but saving the next 18 classes from dissecting fetal pigs.;-)  After the “Firestorm Class,” it was too late to cancel the next Boidesign Class so the administration and I agreed to try Biodesign one more year.  What happened is now history.

After reading BOFAW, Melody offered several reflective comments.  Two important ones were: “We didn’t know what you were going through.”  And, “We didn’t realize that you were growing along with us.”  She also didn’t realize that both of her comments were related.  What I was going through was necessary for my growth.  She also said something that made me burst out laughing.  “We just thought that you knew what you were doing and were going to take us to Yosemite and Mendocino.  The truth was that I usually did NOT know what I was doing, especially on the trips.  Every trip was a blank slate with potential joys, sorrows, dangers and trials waiting around each bend in the trail.  The first time I took two ex-Biodesigners along on the Yosemite trip as chaperones; they approached me on the second or third day and said, “Something is wrong, the trip is not like our trip.”  The last afternoon, they came to me with huge smiles and asked, “Are they all that different?”  I laughed and said, “Yeah, it’s kinda like children being born, they are all that different.”  Each trip was like a living, breathing, cosmic kaleidoscope and as each student and chaperone bumped the scope, the view shifted creating a “once-in-a universe” moment.

It was certainly never boring.  On the final morning of Melody and Kay’s Yosemite trip, we had just finished breakfast and were preparing for the morning activities.  I made a quick trip to the restroom and, as I came around the corner three of the father/chaperones were standing in a small circle.  As I passed by one of them said, “I don’t know what he has planned for this morning, but these kids are pretty worldly, he better not try anything funny.  A pang of fear shot through my body and I instantly retrieved a line from Shakespeare, “Assume the virtue though you have it not.”  Without breaking stride, I laughed and said, “He doesn’t have a clue what he is doing.”  Two of them laughed nervously.  I would have loved to have seen the speaker’s face.

We gathered in a circle under the watchful eye of Half Dome.  I shared a meditation and some thoughts from (of course) John Muir and the students were released to find a quiet place to spend 1.5 hours referring to their journals and gathering their thoughts in preparation for their required, post-trip descriptive paper.  After the allotted time we reformed the circle and invited all (including the chaperones) to share thoughts or reflections from the 5 previous days.  This was typically a time of celebration when students joyfully shared things that they had discovered.  Sometimes I asked what the high and low points were, but usually those all came out in the discussion.  When the final person shared, it was common to share a huge group hug, followed by many hugs between pairs.  During this time, the three male chaperones approached me shaking their heads.  The one who had mentioned “funny business” blushed red and said, “We had no idea of what the kids were capable of.  Sharing this with my daughter will surely be one of the greatest experiences of my life.”  I laughed and said, “John Muir promised that great things happen when men and mountains meet.”  We all laughed.