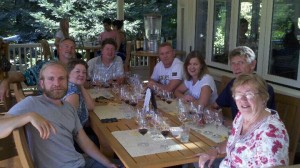 Early this summer Melody contacted me to say that Kay Cummings (Shaw) was coming from New Zealand to show her husband Napa Valley.  She and Melody were spending a week together and hoped to be able to visit with Christie and me.  I smiled and did a mental flashback to the classroom.

By the time June rolled around I had shared all that I could and learned as much from them as I could absorb.  I was not inclined to give them a final exam, but the administration demanded that I do so.  Instead, I told them that I would prefer that they return after 20 or so years and tell me how they were doing.

I was smiling now because, after 33 years, Melody and Kay were coming back to take their final. I was glad that they were coming, but still, I knew that I often felt awkward in purely social settings.  Little did Christie or I know that lunch at Gillwood’s would be the highlight of our summer.

When they arrived they proudly introduced their husbands who both looked like they could be GQ models.  They brought photos of beautiful (nearly adult) children and shared stories about how good life had been to them.  However, they also brought totally unexpected spiritual (and therefore priceless) gifts.  As they talked their eyes sparkled and danced like Sasha’s, the Mule Skinner’s and Moses’ on top of Half Dome.  They were vibrant, enthusiastic and engaging.  And then suddenly, another gift was unveiled; “belly-laughter.”  Kay’s husband (Steve) is a rugby player and built like a fire hydrant.  I was feeling relaxed (w/o alcohol) and playfully mentioned that I was admiring his body.  His face flashed bright red and we all erupted into fits of belly-laughter.  Christie elbowed me sharply and asked, “Why did you say that?”  I mumbled, “Maybe because I am 71 and maybe a little envious?”  It didn’t matter (I hope).  Melody’s mom (Sharon), from the end of the table asked, “What did he say?”  Melody, holding her sides said, “He said that he was admiring Steve’s body!”  Another wave of laughter washed over the table.  Belly-laughter had been released like a Genie from a bottle and we were instantly spiritually connected.

The two hours we shared seemed to pass in two minutes.  The conversation was spirited, skirted dangerously close to “Politics,” but was magically blessed with belly-laughter.  We were happy to meet them and sad to seem them leave.

When we returned home I remembered a beautiful book, “John Muir’s America,” that the class of ’79 presented to me at Yosemite.  I glanced through 33 (ugh) names and found Melody and Kay.  Melody wrote: “Mr. Young, Thank you for all your giving, Love Melody Petersen.”  And Kay wrote, “Happy Birthday Mr. Young (and many more of course).  I know throughout the year, our class will continually feel stress and pain as we grow together. Love (even in such a short time) Kay Cummings. New Zealand.

Kay and Melody were very special, however, nearly, or all, of their classmates were equally special.  Kay predicted what they were going to do, and they did it.  It was almost as if the cosmos had aligned and decreed, “This Class is the foundation upon which 18 more years of Biodesign will be built.”

The year proved to a banner year with the only major trauma coming at the very end. I had fallen in love with a whole class, and when it was time for them to graduate, I was heartbroken. I decided that it would have been much less painful dissecting pigs.

“So the little prince tamed the fox. And when the hour

of his departure drew near—

‘It is your own fault,’ said the little prince. ‘I never

wished you any sort of harm; but you wanted me to

After they left I began to process the gifts they brought and how the meeting evolved.

They returned to say, “Thank You,” and without words ask, “So what do you think? Did we pass our final exams?  Christie and I returned home floating on the cloud of knowing that the girls had exceeded all that we could have hoped for them.  We were extremely honored to have lunch with them.

I have long suspected that the women in Christ’s life were, symbolically, and in reality far more important than the male-dominated “Church” gives them credit for.  I grew to love many of the guys in Biodesign, and they offered many significant “left-brain” improvements to the class.  However, it was usually the girls who profoundly and consistently redirected my spiritual path which led to a class that may never be duplicated.  Melody and Kay were two of the movers and shakers.  Even though Biodesign ’79 was 33 years ago, Melody summed up our relationship when she wrote: “Sitting and talking with you two during lunch felt like no time had passed at all.”

I wonder if that is what heaven will feel like.