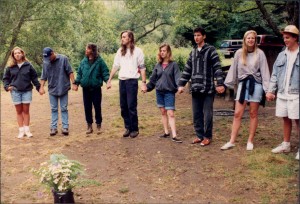 The Biology Of Love part II

After nearly 50 years of marriage and nearly 40 years of collaborative learning with young people, I am convinced that females have a deeply embedded sense of spirituality that males lack.  I know very little about The Bible, but I suspect that there is profound real and or symbolic meaning about Christ’s relationship with Mary and Martha.  Typically, the girls led the way with the guys acting more like willing spectators  We began each class session with “news and notes,” and students were encouraged to bring and share quotes and thoughts relative to our studies.  A trendy quote at the time was; “Girls will offer sex to feel loved and guys will offer love to get sex.”  It was, of course, a gross oversimplification, but properly identified the fact that females and males necessarily approach the concept of having sex differently.  Diane Ackerman pointed out in, “The Natural History Of Love,” males are predisposed to “expand” their gene poll as far as they can, which means having sex with as many females as they can.  Human females, on the other hand, have to be extremely selective in hopes of finding mates who will care for and protect them through the extended period of pregnancy, birthing, and child rearing.  In human terms, this can take as long as 18 years and is getting longer.  Adding the triad of “values, consciousness and free will,” students agreed that the phenomenon of having sex needed ethical, moral and hygienic guidelines.  Some of them usually noted that all of the world religions offered similar guidelines, adopted to ensure the health and welfare of followers.  Early on, someone shared a quote from Jesus who suggested, “The greatest love a man can have is to lay down his life for another man.”  Most of the students quickly responded that their mom would die for them in a heartbeat, but some had doubts about their dad (ouch).

Muir, Emerson, Whitman and Thoreau had all described deep passion (love) for Mother Nature and the kids were interested in exploring the “naturalist ethic.  My “love” file eventually included many student ideas or contributions.  We discovered that the Greeks decided that there were three kinds of love.  Eros, defined as carnal love, philos defined as platonic or brotherly love, and agape, the spiritual or the purest kind of love.  Someone brought in an article that showed that the Hebrew language has over a dozen words for love, each with its own specific application.

That brought St. Paul to mind and what many think is the quintessential commentary on love.  Not that the commentary is easy; it may be the most difficult social contract that any two people can undertake.  It is so daunting that some consider it “humanly impossible” and therefore counter-productive to attempt.  It can also be risky to quote.  Only a fool would try to teach what he could not practice.  It also brought to mind Abraham Maslow who championed the idea that many wonderful “spiritual” concepts need not be ascribed to a supernatural deity and, therefore, can be properly considered in a public school.  In this case, for example, Paul’s passage originates in The Bible, but the words are not exclusive to The Bible.  In fact, they align well with Buddha’s “Eight-Fold-Path” which can be a secular meditative tool for relieving stress and anxiety.  Many of the words are likely to come up in couples around the world, regardless of ethnicity or religion, who understand what John Woolman was referring to when he wrote:

There is a principle placed in the human mind
which is pure and proceeds from God.
It is deep and inward,
confined to no religion
nor excluded from any
where the heart stands in perfect sincerity.

The subject here is principle, not God; and the prose works well without a supreme deity.  Tweaking it just a bit may render it less threatening:

There is a principle placed in the human mind,
the origin of which is pure mystery.
It is deep and inward,
confined to no religion
nor excluded from any
where the heart stands in perfect sincerity.

As for St. Paul’s words:

The passage has been used in millions of marriage ceremonies and, although practicing it to perfection may indeed be “inhuman,” that will not deter countless millions from attempting it.

It ended up being a circuitous path, but I ended up back to Aaron.  I don’t know if the passage was helpful to him or not, I do know that rediscovering St. Paul’s words felt like renewing my own wedding vow.  It also reminded me that I still have far to go

Note:  Even though “Aaron” is an alias, I sent him a copy of, “The Biology of Love,” and asked if he had any reservations about me posting it.

His response was quick, and to the point:

It made my heart sing.