Turtles Teens and Sasha The Potter: A Cautionary Tale

“Opening clay is like opening up to others; you never know what you are going to find, either in you or them.” Sasha.

As the clay turned obediently in Sasha’s firm and knowing grip, his mind was spinning tales involving prose, poems and metaphors of the biological world.  This is one of the stories that emerged along with one of his beautiful clay creations.

When interstate 95 was completed in Florida it greatly improved the efficiency of north and southbound traffic.  It also became a Poster Board example of man’s potentially deadly impact on Nature.  It involves the critically calibrated instinctive response of sea turtles.  I don’t know if research has shown whether females, laying eggs in the sand, have any control of the time of hatching or not.  It is true, however, that hatchlings that hatch in daylight hours face a much greater natural risk from predatory birds than those that hatch in the dark.  That was “before” man intervened and involves a form of bioluminescence known as phosphorescence.

Ocean phosphorescence, commonly seen at night, occurs when sea water is disturbed by waves, ships or animals.  It is largely due to dinoflagellates that occur ubiquitously in the ocean in the form of plankton..  They respond to mechanical stimulation, when the water is disturbed, by emitting brief bright light. Light emission may be seen in the wake of a large ship for some 20 miles.  About 20% of marine species are bioluminescent and many are photosynthetic.

Turtles that hatch during the daylight have little difficulty heading for the surf and freedom from aerial predators.  Those that hatch at night, however, can not see.  They have been instinctively equipped with the ability to hold their heads up and rotate their bodies 360 degrees.  They are looking for the faint, thin phosphorescent-blue line that naturally, and safely, guides them to the water.  In certain areas along I-95, however, the bright lights of passing cars and trucks outshines the weaker phosphorescent light and attract hatchlings by the thousands to their death on the freeway.

Although this is a horrible story about man’s disruptive power over the turtles, it is also a cautionary metaphor of what is happening to many teenagers in the U.S. and around the world.  They are “growing up” at a younger and younger age and not genetically or behaviorally equipped to resist the blinding lights that society has created for them.

I wept quietly as Sasha told this story.  My mind raced to John Muir and I hoped that he was correct when he suggested that kids growing up in Nature’s workshops would grow up strong and healthy.

After all, Christie and I were not only involved with hundreds of Biodesigners, we had four kids of our own who we hoped would grow up strong and healthy.  We now have 9 grandchildren who will eventually have to run the gauntlet through the teen years on their way to becoming healthy, happy adults. 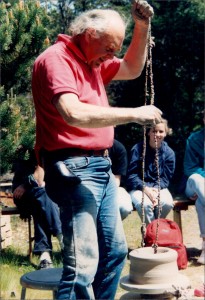